has said, there is no changing Afghanistan even if we stay a hundred years. Many of us agree.
Sir, will you talk to Mr Mathews about it and find out why he feels that way? It might help you in making a decision.
Respectfully.
Posted by camincha at 7:25 PM No comments:

Sir:
After three decades of war, Afghanistan is one of the world's widow capitals. They are ridiculed as prostitutes when they go shopping, and many are unable to rent their own homes. These women are not allowd to work, and treated worst than rabid dogs dyeing, starving in the streets. INN
Mr President, Please read, talk 2 exprts available 2 U about the plight of the Afghanistan widows. And instruct the soldiers you send––if you must send any––2 their country 2 go in a cultural, medical, rehabilitating mission, specially 2 assuage the horrors these women are suffering.
Respectfully
Posted by camincha at 4:51 PM No comments: 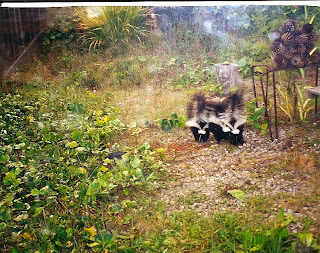 About five years ago during the summer Domino, Alba and Lloyd’s cat suddenly changed her ways. She would demand to be fed on the steps outside. Well, she knew that because of the skunks, opossums, coyotes, neighbor’s dog known to visit their backyard Domino had to come in the house to eat otherwise they would be tempted to help themselves.

So Domino, evening after evening and well into the night laid in the backyard chair just keeping an eye on things: loud birds flying around, absorbing the perfume of flowers, the rustling of leaves and the stretching of grass blades. And knew to tap on the glass sliding door when ready to come in to nibble on the food always ready for her inside the house.

But for no reason that Alba and Lloyd could see Domino continued to demand her food dish be brought to the steps. She let them know she wanted it outside. She didn’t want to come in. They kept an eye on her dish. Ready to bring it in the minute she finished eating. But noticed she didn’t touch her food. Instead, soon as the dish was on the steps Domino ran to it, sniffed it and just went back to seating on her chair. Or so Alba thought.

What was going on? What was this lovely, chubby, black cat that so much resembled a skunk with the wide, white stripe snaking through her from her head to the tip of her tail, what was she up to?

Then one evening the sun in a glorious combination of bright reds and orange had already set. There was no moon. It was very dark, Alba had to strain, really push herself. Was that Domino on the steps? Or was that a skunk? Alba had never, no never, seen such a big one. Where there two of them? Suddenly in amazement Alba realized, yes, it was her cat and a skunk. A fat, big one. Domino was showing her where her food dish was. They stood there. Domino and the skunk side by side. They sniffed each other. Then they kissed each other!

After that night Domino asked for food for the skunk every evening in the same way. The days passed. Another summer evening with lots of daylight, Alba was at the computer next to the glass sliding doors that open to the backyard with its hill and ample open space. Lloyd came in to talk. He was facing the backyard. All of a sudden he exclaimed: Look! Look!

Alba looked. There was Domino coming down the hill followed closely by a fluffy wobbling black fur ball with white specks. A baby skunk! There was purpose on Domino’s steps. She brought the baby skunk to her food dish on the steps. Well, the fluffy ball couldn’t make it up the steps. Inside the room, they just watch. They didn’t move. Didn’t want to intrude. What to do? Just watch. Domino overturned the dish! The food spilled down the steps and all over the ground. The fluffy ball ate voraciously.

From that evening on, Alba fed that baby skunk, its mother, the father that appeared from nowhere, and their four other babies. And she was still trying to make sense of the whole thing some weeks later so she talked it over with Lloyd. A question mark on her face when she finished.

Lloyd’s handsome face showed he was considering the situation, carefully. And slowly he answered, Domino knew the skunk was pregnant. That’s why she wanted to feed her.

Alba smiled, she liked that answer.

Then the raccoons came.

Posted by camincha at 2:03 PM No comments: