As Time Goes By author Camincha

Copyright 2013 Camincha
Smash words Edition All rights reserved. No part of this book may be used or reproduced in any manner whatsoever including Internet usage, without written permission of the author. License Notes: This ebook is licensed for your personal enjoyment only. This ebook may not be re-sold or given away to other people. If you would like to share this book with another person, please purchase an additional copy for each recipient. If you’re reading this book and did not purchase it, or it was not purchased for your use only, then please return to Smashwords.com and purchase your own copy. Thank you for respecting the hard work of this author.   978-1490939957
As Time Goes By
VIEW? What view?
New to San Francisco, the view of the city extending to the edge of the ocean outside the Porter’s, Etienne’s landlords, second floor, main bedroom window on Mercedes Street in the Ingleside district, didn’t mean a thing to her. What was important and kept Mimi, nineteen, full of questions, expectations, was the view of her life ahead forming in her mind, her heart, her body.
He is so good looking, in Miraflores they might never have met. Their age difference, five years, he would have been around women that would know how to act, how to respond. Mimi had said no to every guy who asked her to go steady. When her best girlfriend asked, why? What are you afraid of, Mimi? He might want to kiss Mimi had answered. When she told Etienne he looked deep into her eyes with curiosity, surprise, disbelieve. You mean...you’ve never kissed. . .? he exclaimed.
It is very nice, Mimi said to the slight, stooped figure. The grey blue eyes smiled with appreciation that deepened the furrows on her face as she held her gaze on Mimi’s brown eyes, moist- carmine-sensuous lips, curly hair glistening in the intense July sun. It hurts to look at so much beauty, energy, sensuality. This exotic teenager. Like a dahlia flower, the woman thought and turned to lead the way out of the room.

MIMI, BILLY AND Willy had made the trip from Perú to Portland on the Yaraví, a ship with several stops, whose precious cargo included raw materials from the mines in the Peruvian mountains. They became best friends. Then the three traveled by Greyhound to California.
Aboard the ship there had been entertaining, informative after dinner sessions where plans, jokes, stories went round and round the table. Mimi mostly just smiled and listened. So much to learn!
One favorite topic was the United States open immigration quota to Perú that inflamed the minds of many, adventurous young and old, to try their luck away from family and friends. But, let’s just face it, someone pointed out one evening, USA wants our materia prima, our minerals. That’s why they are being so nice to Perú. And of course our politicians are only too happy to sell to them.
On the light side, there were fun snapshot sessions on deck, for which the officers loaned their caps to the girls who coquettishly tipped them over one eye before they smiled at the camera. Boating outings to ports of call. Unlimited use of typewriters. Some of the passengers took to writing letters, diaries, poetry. The First Lieutenant offered to teach Mimi how to type.
The First Lieutenant forty-two, slender, dark asked her, you didn’t know the officers quarters were different than the passengers? Let me show you. Mimi felt his hand burning hers and took a step back. Gave up his typewriting lessons when she felt his breath burning her neck. Mimi had heard: married has five children. Regular “Don Juan.”
Mimi’s father had instructed her to go to the Peruvian Consulate in San Francisco soon as she arrived and to keep in touch with them: If anything happens to you they will notify me right away. Give this letter to the Consul, Lizardi. Him and I were best friends when we were at the Peruvian Embassy in La Paz. Mimi dutifully went to deliver his letter. Mimi, Billy and Willy walked into the suite on Montgomery Street. A receptionist escorted them to an office where a young diplomat, the Cultural Attaché, got up from his desk to greet them. The handsome red- head, smiled, Good afternoon.
Mimi, all bright eyes, pearly teeth, exuding animal energy, smiled at him: Hello, good afternoon I am here to see the Consul. Sparks flew between them. Never finished the sentence. Surprised, pointed to a silver-framed photo on his desk and exclaimed, those are the Morellis.
I am Morelli. They are my parents, handsome, redhead answered, smiling amused.
They live around the corner from my house. Mimi insisted, amazed. She had just left Miraflores and here was someone who used to live around the block from her!
What street?
Juan Fanning. Mimi smiled.
Right! Right! We live in Colón.
A bond was born between them.
The magic had spread to Billy and Willy. They smiled, a conspiratorial look in their eyes.
Handsome had taken in the bright eyes and sensuous lips. Smiling, his light brown eyes set on Mimi, he let the sparks go right through him. That moment frozen in time became theirs forever. Later he would say to her: I treasure the memory of the girl you were that afternoon. Years later he would add, why can’t you be that girl for me now?
Handsome became her first date. Taught her to dance, taught her to kiss, to enjoy sex, to want sex. How to use her body to please a man. To whisper sweet nothings while playing with his earlobe to make him want her. With him, Mimi became a woman. 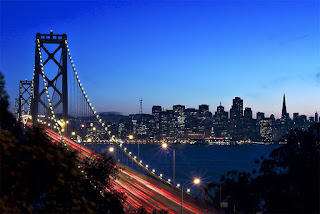 flor: As Time Goes By

flor: As Time Goes By: COMING SOON As Time Goes By, a historical-romantic novel accurately portrays the sights and sounds of the streets of San Francisco and ...
Posted by camincha at 6:26 PM No comments:

As Time Goes By

COMING SOON
As Time Goes By, a historical-romantic novel accurately portrays the sights and sounds of the streets of San Francisco and suburbs, just beginning to be created, like Paradise, provide them with a stage. Then Mimi and Etienne become much more than characters as they weep with the fog, smile with the sunshine and flavor their lives with the salty spray of the ocean. They become us, living yesterday, today, always.
As Time Goes By, a historical-romantic novel for which unnamed number of hours were spent researching brand names. Prices, of houses, cars, furniture. Of streets, public transportation, and how their routes and their looks have changed with time. As the couple settles in, as the baby grows. Salaries. Lay offs. What was that? Not pleasant. Do you really want to know? Bitter, scary. The way it ruined their lives. The cost of starting over each time.
As Time Goes By, a historical-romantic novel in which their story unfolds––filled with erotic connotations, surprises, and traumas––Mimi and Etienne try to fit in and cope in their foreign environment. They also learn to survive troubles of the body and soul, the passions of the heart, love and betrayals in their marriage, the pain of doubts and disappointments. The fulfillment and peace of mind of making up.
Let’s meet them……….

Posted by camincha at 6:13 PM No comments: