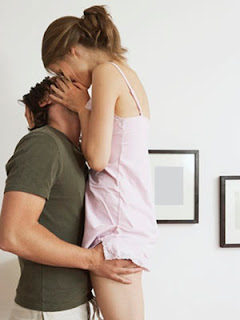 
SOME WEDNESDAYS WHEN  she met Lloyd, Alba would be very
tense. Full of doubts. What was she doing? It didn’t mean anything? Or did it? She was confused, lately she felt she cared for him, really cared. Oh! all those contrary feelings.

Lloyd knew how to handle it. He would make small talk. At moments touching on serious subjects, then a joke or two and he would talk stealing sideway glances at her to gauge her mood till she started to relax. Then smiling into her eyes as if to ask her permission he would take her hands, kiss them, pull her to him….

He liked her. He really cared for her. He had told her he loved her. He had said as much. He murmured in her ear often, I love you, Alba. He called her everyday. Several times a day. Day and night. He showered her with lovely gifts: a deluxe edition of English-Spanish dictionary. Jewelry. A TV set. And he was interested in everything she did. So kind, gentle, good looking, passionate. Yes. And married with two children.

So she knew. Didn’t need to ask herself, why?? She brought it up. Softly, more as thinking out loud….

He listened. Paid attention. Invited her to brunch the following Sunday at his Club. Took her swimming at a lovely Country Club in the Peninsula. They went dancing. But it was too late. The combination of her new financial independence, her relationship with Bert. The uneasy feeling that never left her was growing and growing in her.

THE FOLLOWING WEEK Lloyd’s office was full of sunshine. The aroma of coffee and fresh pastry, so enticing. But he wasn’t his usual confident self. They had been talking in previous days of their relationship. This is not going to ever go any place, Alba softly.

A dark shadow of pain darkened his green eyes.

Alba’s filled with tears. She had not imagine the pain she was feeling. The room became dark, she was trying to contain the tears that were

pg. 9
spilling down her cheeks. They turned in passionate embrace toward each other. My darling, my love, Lloyd cried out. Their love making was savage. They exploded into one another. They climaxed together.

Lloyd didn’t say anything to let her know he knew she was seeing someone else. He was silent. It was obvious to Alba he was giving her a chance to talk to him.

She did: It has been wonderful, magicaI but need time to study, you  know I have enrolled at State. She looked up, he was watching her. A look of relief in his eyes. Thankful she was being discreet. He smiled.

Alba smiled.  She smiled broadly, lovingly. She had not realized
how much this was going to hurt. Tears rolled down her cheeks again….

ALBA CONTINUED TO see Bert and they had fun together. They enjoyed movies, ethnic restaurants, drives down the coast. A  plus was that their love making was so very good. He encouraged her to buy underwear at Fredericks of Hollywood downtown which specialized  in unusual, bawdy pieces, panties with a slit in the crotch. Oh yes! he would moan. Extra friction….Oh, Yes. Yes. They found they enjoyed talking, really talking to one another. One day he mentioned he was thirty-three. And she realized he didn’t know her age…She found him staring at her, his face distorted by an expression of disbelief.

You are forty-nine? He managed. Then to his credit, he smiled. His expression softened again. But immediately he looked away averting her eyes.  From then on their relationship cooled down. He took to mentioning often, how much his aging mother wanted grandchildren. Alba took the hint. Exasperated, one day, she told him, Well, I had a tubal ligation…

Bert, looked at her. His face a big question mark? ? ?