As Time Goes by. 3 posting. by Camincha.

Of course, she said. Her only experience, summers doing translations for her teachers. She looked forward to what had heard was readily Available in the U.S.—babysitting, waitressing, office trainee. College in the Fall.
Foster’s chain of cafeterias were all over San Francisco. Foster’s at Seventh and Market never closed which was most welcomed by Greyhound passengers that arrived at the nearby terminal at all hours, day and night.
Mimi getting off the streetcar would be greeted by music blaring from loud speakers of nearby record stores, Kay Starr singing Wheel of Fortune, Jo Stafford You belong to me, Nat King Cole Mona Lisa.
The cafeteria’s wall to wall windows looked out onto the street. Customers found a festive atmosphere inside where orders were shouted in sing-song, 1 CHICKEN SOUP. 1 PEA SOUP. 1 BEEF STEW. Clever word play was practiced: HOLD THAT CHICKEN AND 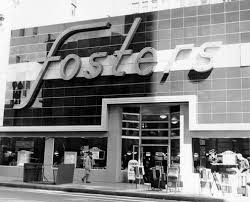 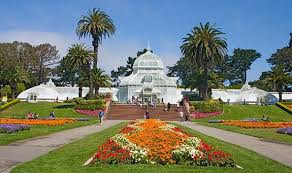 Employees wore uniforms provided by the company. The men, white jackets. Caps for the cooks. The women, white shirt- dresses, hem at mid calf. A large breast pocket on the left for them to place a handkerchief which they had to provide—bright colors, were suggested. On their heads a hairnet topped with a coif held upright with bobby pins. They looked crisp, attractive.
Except Glenda, the negro dishwasher woman in the basement. She was forever dirty, wet, her uniform, her rubber gloves, and her face, wet with sweat from the steam exuded by the machines. But she was always smiling. And she liked Mimi, her charisma, her laughter. Mimi made it a point to go down to visit her often. To her, Glenda with her toothless smile, face full of furrows seemed ancient. One day she blurted out, Why are you still working?
To pay for my house, Glenda smiled.
When I am old, Mimi laughed, my house will be paid for.
Glenda smiled her toothless smile.
Max the Manager was tall. Gentle. Mid forties. I know it’s your day off Mimi but I need you to come in Wednesday.
What did he mean? Wednesdays were payday. She had to come in and get her check, of course. So when she showed up not at eight but eleven in the morning in her blue suit, white shawl draped around her shoulders Max stared in disbelief. She just stood there.... Definitely a lot was lost in the translation.
Friday morning. Mimi asked cook-trainee, Bobby, why a new cook? Where is Frank?
Blank look from twentyish Bobby. British. Shy. He had been embarrassed when a couple came in one day and singled him out.
Your parents? Mimi had asked.
Turning crimson, he is my stepfather. Bobby answered.
I have a stepmother.
Here?
No, in Perú.
Ah! Frank? he had a nervous breakdown Wednesday. Went crazy started throwing dishes around.
So he was crazy. She had thought so. Mimi remembered, he asked her out then took her to an industrial area of San Francisco and just drove her round and round. Curious, she had accepted his invitation to go for a ride. Etienne would never find out. What would he be like, that wiry little old man? Someone the likes of which she never would have come across living at home in Miraflores. Have you ever been here? Frank had asked. Are you crazy? Mimi wanted to shout. So much to see in San Francisco why would anyone come here? But answered quietly, calmly, no. He turned around and drove her home. However he had also been kind to her, she recalled. He had offered advice and accompanied her to a police station to make a report when her wallet was stolen. Some communist might be using it right now. No good for you, he had said through closed teeth that held his constant Camel.

SO MUCH TO learn. English. Definitely not the English she studied at school, for which her mother had hired a tutor and her father had been proud to hear from her lips.
They wouldn’t have laughed along with everyone in the cafeteria when doll-face-heavy-set-early-fifties Olga, who tongue in cheek coached Mimi with her pronunciation, Honey, is good not wood, got an order for chicken soup but the customer changed it and Olga in the play on words she was known for, shouted loud as she could: HOLD THAT CHICKEN AND MAKE IT PEA.
Or when Max stared and smiled in disbelief after an irate woman complained, that girl told me: Make up your mind.
What exactly did you say to her? Max asked Mimi.
I said: Just let me know when you make up your mind. I wanted to mean, take your time. I wanted to be polite. She was, the lady, was standing there reading the SPECIALS and changing her order over and over.
No. Her English didn’t always serve her right. And there was the time she went in the kitchen for a special order and asked Frank’s replacement, where are the hard eggs? She chose to ignore his answer.
I have the hard eggs, Honey.

IN THAT UNUSUALLY warm afternoon Etienne and Mimi sitting on a blanket on the grass were enjoying the concert at Golden Gate Park. He didn’t notice until following Mimi’s eyes, hesitating and blushing nodded in the direction of a woman who had been turning to look at them over and over. The good looking, middle aged brunette smiled, waved fondly. Etienne looked away and soon as the band played the last notes helped Mimi up and walked out. His arm around her shoulders they walked in silence to the car. He opened the door for her.


They had met shortly after he arrived, she was married to the man in the park sitting next to her with their children. A Merchant Marine. He traveled. They had an affair. They spend together entire afternoons...Saturdays and Sundays. She had invited him to dinner at her house...that’s how it started. She already had the boy. He was a good little kid. They would leave him at the movies. The one that showed only cartoons on Market St. Some nights Etienne stayed with her. Sleepless nights of passion. Left at dawn. Had to be in the office at nine. He would be wasted so he laid down, his head hanging on the side of the bed, to restore circulation. It gave him the push needed to start his day. Remembering, Etienne smiled in spite of himself. He had had to break it up. She wanted him to marry her.
Posted by camincha at 8:44 PM

EXCELLENT! Read about the magnificent 50s.

This novel brings GREAT memories. Many thanks.